Kupka - Waldes | Artist And His Collector 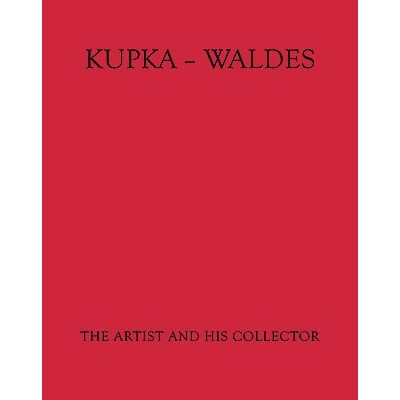 The unique relationship between the artist and his collector. Kupka's art work in the Jindřich Waldes collection. Large-format colour publication includes the artistic production of the world renowned Czech artist František Kupka in the private collection of the manufacturer Jindřich Waldes. The book also includes extensive documentation of his commercial and graphic work and important texts by Ludmila Vachtová, Jan Rous. At the end of the publication there is a detailed inventory of the entire original collection.

The book Kupka – Waldes; The Artist and His Collector is a part of an exhibition of the same title.
It documents works by František Kupka from the extensive collection of the Waldes Gallery, which was confiscated by Nazi and Communist powers and was returned to the inheritors in 1996.
Kupka's work made up a very significant part of the collection thanks to the friendship between the artist and the collector. Their friendship was very strong and lasted from 1919 until 1939 when Jindřich Waldes was arrested by the Gestapo. He died in 1941 during his escape from occupied Europe.
The publication does not intend to serve as an art historical study of Kupka's work but rather as a resourceful description of Kupka's works in the collection of Jindřich Waldes who acquired them directly from the artist. The book's benefit lies in reminding us of the tradition of private art collecting in Bohemia, which was almost forgotten. It is also the only complete documentation of Kupka’s work in the Collection.
The book includes a comprehensive catalogue of works by František Kupka in the Jindřich Waldes Collection (oil paintings, works on paper, illustrations, sketches, exlibris, sculptures) with their precise titles, years of production, measurements, possible notes by František Kupka, signature, collector’s mark of the Waldes Gallery, provenance, exhibitions and literature concerning the individual works.
The catalogue section of the book presents reproductions of the complete series of drawings Song of Songs which has never been published in its entirety.
Texts written especially for this book are composed into sections Jindřich Waldes – Collector and Jindřich Waldes – Entrepreneur, selection of correspondence of Jindřich Waldes and František Kupka from 1919 - 1936 (each section also includes notes and separate visual supplement).
Part of the book are also precise biographies of František Kupka and Jinřich Waldes, list of interns at Professor František Kupka studio in Paris, list of solo and group exhibitions including exhibition catalogues and selected bibliography.
The visual section comprises 143 reproductions with a selection of the most important works from the Collection. The book includes a foreword by Jiří Waldes, son of the collector, and Ludmila Vachtová, one of the most knowledgeable experts on the work of František Kupka.

František Kupka (1871 – 1957)
is one of the most significant Czech visual artists of the 20th Century. He is one of the few Czech artist who received wide international recognition and stable place in history of arts. He is considered to be one of the founders or pioneers of abstract painting. Kupka had exhibited his first abstract paintings already in 1911.
Communist Czechoslovakia long considered Kupka's works as "an example of imperialist ideology and cosmopolitan nihilism that is harmful to the peoples," and stored them in depositories. Only in 1958, the Czechoslovak state remembered its artistic masters and sent three ideological derelicts Otto Guttfreund, Josef Šíma and František Kupka to represent the country at the World Expo in Brussels.
Works by František Kupka are owned by leading international galleries and museums of modern art, prices of his paintings reaching high figures on international markets and rising.

Jindřich Waldes (1878 – 1941)
was a significant Czech entrepreneur during the first three decades of the 20th Century. In 1902, he established Waldes & Co., engaging in making small metal objects out of which the Koh-i-noor patent became the most famous. In 1907, he expanded into a factory in Prague's Vršovice district, and eventually abroad. Waldes was one of the most significant Czech self-made men. Jindřich Waldes was a great Czech and a patriot which was also reflected in his collecting activities. Works that included Czech masters from the Rudolfinian era to the most important authors of the 19th and 20th Centuries were purchased in Bohemia as well as Vienna, Paris and Berlin. He befriended a number of contemporary artists of that time and supported them. One of his most significant and tight friendships included that with František Kupka. Thanks to this tie, Waldes was able to collect a unique collection of Kupka's work, which is presented to the public today.