S.d. Ch.: The Salvation of Europe from a Window of Hotel de Paris in Cromer 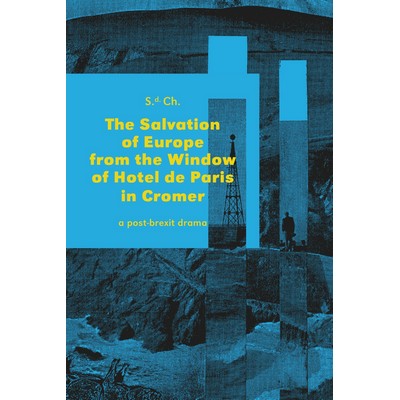 Set in unspecified future times, the play uncovers the goings-on of an illegal European Union government in the countryside of the United Kingdom. Many years after Brexit and the global unification religious reform we find ourselves in a placid city of Cromer in East Anglia where a group of undercover agents of the burnt-out but still smouldering union meet at a seaside hotel. Gazing over the Channel they prepare an insidious cultural sabotage. Unluckily they meet with resistance of the new order´s mechanisms and almost mythical phenomena.

(There is a knock on the door resembling a signal.)

ROMAN (behind the door): PETRA, are you there?

PETRA: Is that you, Roman?

PETRA: Come on in, so you don’t hang around the hallway!

(ROMAN comes in carrying a tray with a teapot and cups.)

ROMAN: It’s from a teabag, but it’s real. (he places the tray on the table) That’s the best I could rustle up.

PETRA: Even that is a miracle. Thank you.

ROMAN: I could also rustle up some butter biscuits.

EUGENE: You are able to obtain butter biscuits?

PETRA: That would be fabulous. Is everything ok downstairs? Nothing suspicious?

ROMAN: All is still the same. I’m off.

EUGENE: That was the guy from the reception, right?

EUGENE: What kind of a person is he?

PETRA: Absolutely reliable. The new circumstances painfully struck him and that’s why he is boundlessly devoted to our project. Something like you.

EUGENE: Are you abiding by the logic that everyone who lives in Europe and has been struck by the new circumstances is boundlessly devoted to the European exile government?

PETRA: Of course, do you think he’s got another alternative?

EUGENE: There is always an alternative.

PETRA: So you’d better listen to me… You will be pledged to secrecy. You are not allowed to tell anyone about anything regarding your mission. That means even Roman, just like he can’t tell you anything.

EUGENE: But I know he’s guarding me.

PETRA: You know, but he will not tell you. (there’s the distant sound of the sea surf.) Let’s have the tea, what do say? (she pours the tea) I’m curious what Europe means to you?

EUGENE: Look, Mrs. Deputy, while Hamlet is visited by the ghost of his dead father in order to ruin his life by inducing him with revenge, dead pastor Neitzsche directly enters his son’s dream where, accompanied by the dull sounds of an organ he comes out of his grave, marches into a church, from where he shortly comes out again carrying a swaddling blanket with crying Friedrich and he returns to his grave with him and the ground closes up over both of them. These two deliria define the European spiritual space for me.

PETRA: Do you mean something like a patriarchal failure?

EUGENE: We are passing down power encumbered with crime and sources of spiritual comfort perverted into a nightmare. Therefore, rather than patriarchal failure, I had in mind something like inter-generation destruction. And that is a characteristic only for alien cultures.

PETRA: Since when are we an alien culture?

EUGENE: Since the very beginning. Just remember the founding myth.

PETRA: You mean the abduction of Europa?

EUGENE: Yes. Everything started here with the abduction.

PETRA: Surely such things have no influence on modern Europe.

EUGENE: Don’t worry about it, that’s what we, intellectuals, are here for – not to miss these things. We should have realized earlier that in a disrupted world it will be precisely that which is not disrupted that will unite, and that we had the last economically and socially stable organizations with age-old global ambition and thousands of years of experience with fighting for power and restraining human rights with an illusion of metaphysical guilt.

ROMAN: So you mean like you missed the boat?

EUGENE: Well, if you ask me, no one could have ever anticipated this!

ROMAN: In that case, you can stay calm.

EUGENE: Absolutely unexpected development. In this case we can’t talk about failure!

EUGENE: Of course, we cannot say that we stood the test either.

EUGENE: Happen?... The two biggest enemy religions united and you say: happen? It doesn’t happen that in the name of reconciliation top Christian leaders hand over a world-famous intellectual under fatwa, not in book form but for execution, and Muslims, in return, issued a decree that with this execution jihad ends with a sword.

ROMAN: It was that Rushdie, you’re reading, right?

EUGENE: Yes… I feel awful when I recall how we shared the joy from religious reconciliation with all the people of good will, at least until the time the first law about the world religious government came out.

ROMAN: I remember that. I had to turn in my mobile phone, tablet and home theatre. The home theatre hurt the most.

EUGENE: The technology law. Theoretically the goal was to limit free access to information, but practically it meant the end of consumerism.. People are idiots! What do you think! Only for that reason the new regime had so many protesters. Their relocation to camps proved to be a non-ageing solution.

(Distant sound of the sea surf, whispering of the wind.)

ROMAN: I was in a concentration camp for a year.

ROMAN: I didn’t turn in that home theatre.

EUGENE: And you say it so matter-of-factly? What was it like there?

EUGENE: Did they torture you?

ROMAN: Not really… (he points out the window) See that light up there? Judging from its speed I’d say it’s the God’s Eye.

EUGENE: Drone monitor for after nightfall?

ROMAN: I’ve heard they are equipping them with infrared cameras.

(The sound of the sea surf, whispering of the wind.)

EUGENE: Can you see anything besides the darkness with those binoculars?

ROMAN: No, I see the darkness, but close up.

(The sound of the sea surf, whispering of the wind.)

EUGENE: A Russian patriarch expressed it in the best way: After all, there is only one God and he is far from dead. We have been blessing the army and police for centuries, why shouldn’t we be able to command them as well?

ROMAN: Look at all those lights!

EUGENE: That looks like an entire federation of God’s blessings.

ROMAN: Have you noticed that the crackers that they’ve been dropping with the blessings no longer have the chocolate icing on them?

EUGENE: There’s a light over there too, isn’t it her?

(The sound of the sea surf, an engine and whispering of the wind.)

S.d.Ch.
Over the past five years, an artist working under the pseudonym of S.d.Ch. has become a phenomenon, embellishment and enfant terrible of the Czech cultural scene. Through his brilliantly written plays, in which even technical comments have an emotionally driven literary form, he ironises our contemporary times whilst still evoking the horrors of their direction.  His critical comments in the media and cruel one-act plays depicting the art-life are hard to rival, especially after the death of the poet and performer Milan Kozelka.
The tragic hyperbole in S.d.Ch.´s writing is deliberately introduced by his parodies of Goethe´s overrated discourses, while his visual humour relates to the surreal collage monstrosity of Max Ernst. His work holds the best of the indestructible obstinacy of Thomas Bernhard, Céline´s sense for building up narratives of the catastrophic ineptness of tattered human hopes, Ghelderod´s theatrical comicality and a life´s inspiration from philosopher Ladislav Klíma.