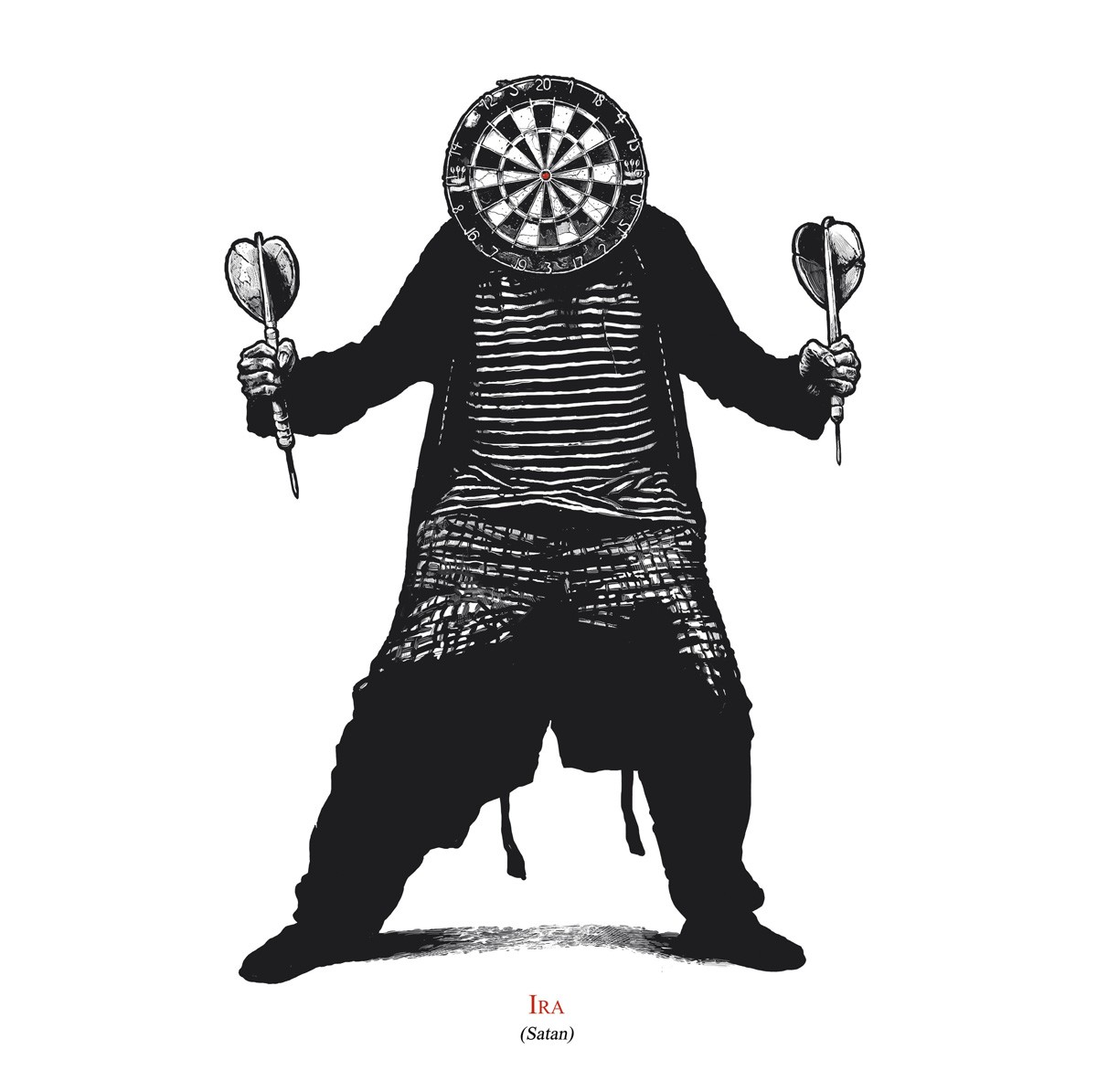 Text for exhibitions of enlarged prints from Moses Reisenauer’s pocket The Seven Deadly Sins and Ten Commandments with occasional commentary.

Böhmen und Mähren Kunst – Stories from the sewer of Europe

The Czech Republic is the polar opposite of all real or imagined inhospitable lands. There is nothing here that might inspire respect for nature or fear of its elements. It is simply an adorable country, an enlarged village rock garden – if you have those things in Germany and know what they are. The Czech Republic is a former part of a now-defunct, repeatedly failed state that eagerly anticipated its demise. Its next-to-last resurrection, which was in exchange for the life of just one Jew, Hilsner, led to the Second World War. If there had been no Czecho-Slovakia (and later the Czech Republic), it would have been possible to build a motorway from Berlin straight to Munich, the world would have never heard the term “humanitarian bombing”, and robots would still be called automatons. The most important figures in modern Czech history are tatíček (“little father”), a third-rate philosopher in riding boots surrounded by naked children, Hitler, Mr. Werich, the two-headed monster Klavel, and agent 009 Schwartsumberg.

So let’s only talk about this accursed region without using its name, about this crater that looks as if it had been carved by a meteorite, whose margins provide natural defense but also isolation. Rivers flow from it as from a cracked jar, dirty, acidic and steaming because the Czechs produce electricity by burning old rags from the mounds of garbage cheaply acquired from the rich Germans. The Czechs are known as the only Slavs to hide their crimes against humanity. They have stuck their own foot in extreme unction, and yet they hand out advice until the hyenas start to choke with laughter. They hate all the surrounding tribes, except for the Roma, whom they consider to be descendents of the Romanians – who refused to occupy the crater in 1968. The Roma don’t have to work; they can drink, dance, and swear in their own language. Czechs don’t dance. And foreigners in general are not popular – except for Americans, whom they have never seen but they like the flag.

Although in such an environment art flourishes about as much as in the Gaza Strip, every now and then an artist appears who is willing to work in public despite the unctuous admiration of the uneducated and vulgar populace. One such public-yet-invisible artist is Pavel Reisenauer.

A grumpy loner, a skeptical mystic and a Christian in a tight spot

“Pavel Reisenauer was born on 7 October 1961 in Prague, where he lives to this day. After graduating from secondary school, he held various jobs (including work as a furnaceman and security guard) that allowed him to work on his paintings. He has three daughters. He has been employed by the weekly Respekt magazine since 1991, and has published a book, 209 Drawings and 33 Paintings. He has held numerous exhibitions, and in order to avoid succumbing to this temptation in the future, he recently set up a website gallery of his work” – which is also where this short bio comes from: www.pavelreisenauer.cz.

Like his web gallery, Reisenauer’s work can be divided into two areas. The first includes journalistic illustrations for Respekt, the Saturday insert “Orientation” for the Lidové noviny newspaper, and book illustrations for various publishers. Thanks to his illustrations – with their characteristic style and unrelenting humor – he is known to the Czech public if not by name then definitely from his drawings on the cover of these publications. The second area of his work are his non-commissioned drawings and paintings, through which we can get to know him in his own world: “Where solitude beginneth there endeth the market-place; and where the market-place endeth, there endeth also the noise of the great actors, and the buzzing of the poison-flies.” Aliens, the underworld, suburban landscapes, daughters, out-of-place animals, sex, alcohol, and above all loneliness. Also, the streets of Reisenauer’s favorite neighborhood, Prague’s Nusle district, where tourists and developers are still rare, and so it remains a haven for outsiders and crumbling tenements in a sold-out city. In recent years, he has preferred to work in series that give him greater freedom. The pictures in each series share a common motif, technique, use of color and style. These include the computer drawings from The Ten Commandments and The Seven Deadly Sins, as well as the temperas from Streets and the recently completed Nusle.

A visitation every day

This artist – who has successfully avoided public recognition and exhibits only rarely – has decided to bring to Berlin his highly personal interpretation of the Ten Commandments. Reisenauer has taken these basic rules for Jews and Christians (as contained in the Catholic catechism) and transformed them in his image, knocked them from the diction of church language and down to the ground of his reality: God appears as Superman, divine punishment falls upon a desolate suburban street, graffiti artists spray-paint a Jesus fish on the hood of a car, a legless mother has been taken on an outing in her wheelchair; we see evidence of suicide (far more common than murder), a slightly vulgar drawing of a penis attacking Venus, a black hand painted on the wall of a ransacked house, a skull that looks as if it has been pulled from a mass grave, its mouth grown shut, a woman depicted as a childishly gussied up and romantically enamored monkey, and superhumanly oversized mafiosi who remain unseen by passers-by. When asked where why he felt the need to confront these two traditional Christian subjects, Pavel Reisenauer says: “Because in the end I am a Christian, primarily one in a tight spot.”

At this exhibition, Reisenauer will present his latest as-yet-unexhibited series, The Seven Deadly Sins. Here, Reisenauer focuses his critical and ironical gaze on himself. The theme required a more simplified approach as compared to the previous series: the square-format paintings are made in black on a white background, emphasized at most with foreboding details in a devilish red that is the only similarity with the previous series. With just one exception, the digital images’ main subject is the artist himself. His figure, accompanied by just its shadow, moves through a space without background, accompanied only by symbols or attributes of the relevant sin: a proud magician (more like a con-artist juggler of nothingness in a raggedy bathrobe and worn t-shirt); a harried money-chaser; a dreamer drooling for things he doesn’t have; an unhappy and not too attractive lecher with a strangely non-prurient expression; a drunkard who has been transformed into his bottle; a raffish loner and implacable ironist within whom pride struggles with insecurity and mystical faith with disillusionment, skepticism and resignation: the final image shows him in the position that he himself would probably like to adopt forever.